UNSW graduate dines out on TV series about family of cannibals

UNSW Media Arts graduate Chris Thompson is bringing an unusual Australian cinematic venture to our screens, not least for its startling premise.

Patricia Moore is a coming-of-age horror flick about a young girl coming to terms with her itinerant family’s dark secret: they’re cannibals. Travelling around outback Australia in an old converted school bus, the family scrounges for prospective meals by using Patricia as bait.

But when the fridge in the bus breaks down near remote town Charlton, the family is forced to spend time among the townsfolk … who are becoming increasingly appetising. Patricia is drawn to a local teenager, Toby, and finds herself challenged by the family’s number one rule: Never fall for the food! 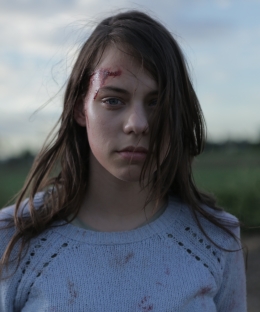 Adding to the novel storyline is the innovative format used in the storytelling: nine 10-minute episodes which will be consumed on mobile and streaming devices such as Apple TV.

Chris Thompson was the sole producer on this Aussie production which was born after winning a pitch to MIP TV, the Cannes Film Festival equivalent in the digital television space.

“We entered into the inaugural MIP TV digital short form pitching competition and we were one of six ideas in the world to get picked up,” Thompson says.

The primary funding source was BlackPills, a digital streaming platform targeted at Millennials that enables them to download the episodes via an app on their mobile devices, or watch on smart TVs.

Already available in Europe and North and South America, Black Pills is expected to be available in Australia later this year, and Thompson believes it will allow the short digital format to flourish.

“Europe, and specifically France, have a culture of short form in TV,” he says.

While we wait for the series to be available widely to an Australian audience, Patricia Moore has begun its festival run and this month had its first preview screening for cast and crew at the Chauvel in Paddington. Internationally it has already screened in Europe and America.

“Patricia Moore had its world premiere in Series Mania in France and it is playing in Denver SeriesFest. Then it will be playing in Melbourne WebFest at the end of this month,” Thompson says, adding that the film is up for nine awards at the Melbourne show, making it the most nominated production this year.

Shooting a film in 10-minute instalments posed some interesting challenges for Thompson and his crew. 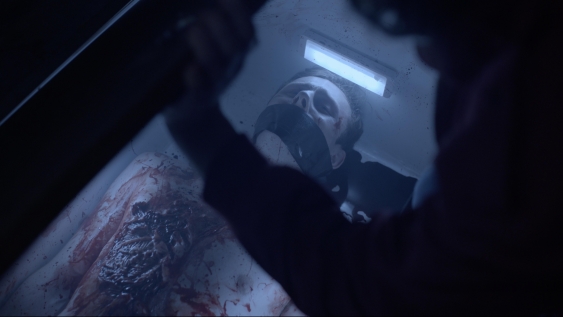 The family consign their intended meals to a freezer in their bus.

“Because it’s episodic, there is a dramatic shift in the storytelling process,” Thompson says.

“Now you’re looking at a cliffhanger every 10 minutes. That was a big learning curve. We’ve got a lot of great mentors and they make TV series, or they make feature films, while this is both and neither at the same time.”

To adapt to the new format, Thompson and writer/director Blake Fraser had to restructure the script.

“What we realised is we could cram a lot more in the first three episodes and really get the pace working without changing the overall duration of the entire production.”

While the notion of a cannibalistic, murderous family roaming outback Australia for food may be confronting, Thompson sees the film more as a sentimental family drama than straight horror.

“What’s really interesting about this story is Patricia Moore, as much as we love her and follow her narrative, she is somewhat of a monster conflicted about what the right and wrong thing to do is,” Thompson says.

Lonely existence of the cannibals: Marlo Kelly, Danielle Cormack, Shaun Martindale (with Jack Ruwald, background) in a scene from the series.

Patricia Moore was written originally with a three-season arc in mind and Thompson says negotiations are underway about the next season, which he hopes to start this year.

Chris Thompson graduated from UNSW in 2012 with a Bachelor of Digital Media from UNSW Art & Design. He has worked in advertising and boutique production houses before striking out on his own to set up his production company, Four Leg Films, along with partner Blake Fraser.

Thompson says his business makes a mix of “corporate stuff that pays the bills and short films to keep me sane”. The company recently won an award for best cinematography at Freshflix in Sydney and the grand prize at the Shärt International Comedy Film Festival in Canada for the short, Jim’s a Pineapple.